Affectionately known as the Cross Wallet, this Adroit design is a favourite.

The Adroit vertical cross wallet breaks those dimensions to offer a unique and stylish accessory for men.

We highly recommend this kind of cross wallet for those who prefer to hand-carry their wallet rather than hide it in a back pocket.

Cross Wallet for men are usually a standard size. The Adroit vertical Cross -coin pocket- Wallet breaks that dimensions to offer a unique and stylish accessory for men.

We highly recommend this kind of wallet for those who prefer to hand carry their wallet rather than hide it in a back pocket.

This is a fictional piece. Don’t feel shy to look for its roots in the metaphorical reality of life.
Life, if I may compare it, is like a good leather wallet. A mens or ladies wallet, doesn’t matter. Go figure. The difference is perspective.

Chapter 1
Strength of character
There was once a man named John who was going away on quick work travel. The past year had been tough on him. He lost his father that year, the only family left. All that survived him was his old leather mens cross wallet. It was a simple, minimalist wallet – matte brown with a logo K on it. John never realized how much that wallet had started meaning to him. And how much it reminded him of his dad’s character – tough, yet smooth; simple yet efficient and very bold in his own minimalistic way. The brown cross wallet had a stark white thread stitch. John thought about how his father used to carry the wallet every single day in spite of which not a single fragment of the thread was out of place. The care with which his father kept his things, astounded him.

Chapter 2
Longevity
As John zipped up his only travel luggage – a black handcrafted leather overnighter, his attention was diverted to his dad’s wallet that he had tucked in safely in the drawer, might its reminder be too painful, too soon. He headed towards the drawer and with trembling fingers, felt for it in the dark crevices of its corner. He looked at the cross wallet and gently tucked it in his travel bag. He picked his leather overnighter, wore his black shoes and gently shut the door behind him. He didn’t even bother to recheck his door. All that was important to him, he was carrying with him.

Chapter 3
The cross wallet
John traveled light. Even in everyday dressing. He wasn’t habituated to carrying a mens wallet everyday. But this morning he walked out of his hotel room with a business bag which had his laptop, other necessary paraphernalia for his meeting. And his dad’s wallet. It was an important presentation for him. He was going to make a pitch to a parent company that would help him with consistent business. He was nervous. Taking the wallet along was almost like a reassurance of his dad having his back in this crucial time for him. He had worked hard on the presentation. His usually calm demeanor was tense. In the cab, he opened his business bag and gently ran his hand over his dad’s brown wallet.

Chapter 4
The minimalistic lifestyle
The company he was visiting wanted John, who was an interior designer, to completely reinvent their offices across the globe, amounting to almost 50 offices worldwide. Their buzz word was ‘minimalistic’. Their brief had been constantly reminding him of his dad’s wallet. The cross wallet was an integral part of his dad’s daily dressing routine. In the meeting room, his laptop switched on with a gentle whirr. Almost instinctively, he put his dad’s mens leather wallet on the table, in his line of vision. He started his presentation as confidently as he usually was, he knew this like the back of his hand. His passion for this project easily resonated in every word he said. However, he kept glancing at the wallet on the table every now and again. At the end f the presentation, the CEO of the company asked him, “I’d like a cabin in the head office for my dad. I know we didn’t include it in our brief but could you give us a quick idea of how you would execute that?” John caught a glimpse of the wallet.

Chapter 5
The plan
Seeing the leather wallet made it easy for John to narrate his idea – a simple, yet elegant and bold statement office. The colours would be shades of brown wood – sturdy and homely. The upholstery would be ivory white sheer curtains so that the beautiful days could be enjoyed from the ceiling to floor French windows. The CEO and his father looked at each other with knowing smiles, a moment that John sorely missed having at this moment. The father and son were sold on the idea. Needless to say, John got not only this project but was assured of a recommendation to another company, after he had finished this project. John packed his few belongings and left the office with a slight lilt in his step.

Chapter 6
The last chapter
With his business bag hung securely over his shoulder, he waved his hand wildly to stop a cab. It immediately stopped. He was about to sit when he felt an ever-so-gentle tap on his shoulder. He turned wondering who he knew in this unknown neighborhood. It was an elderly gentleman. He wore a brown suit with a hat. He asked, “I’ve always wondered if there’s a trick to stop a cab. I’ve been waving both hands for 20 minutes but haven’t been able to stop these bumblebees. I’m southbound. If you are going the same route, could we share this ride?” John smiled and slid inside to make place for the man. They barely made any conversation. But before the man got off, he took out his wallet to pay John his half. It was a cross wallet with a K monogram. It wasn’t matte brown with a white thread running the edges but it had a picture of the old man with a younger man in the credit card slot. The old man thanked him and got off. John immediately reached for his dad’s brown leather wallet. He opened it with a racing heart. One of the gussets had two 10-dollar bills. The other had a carefully placed photograph of John with his dad.

There are no reviews yet.

Be the first to review “Adroit Cross Wallet”

USD 114
The Duncan wallet is a smooth finish classic design. A wallet that exudes a feeling comfort and of being home. Despite its compact design, it will surprise you with the space it offers. It allows a double bill fold and comes with a snap closure. Double bill fold; 9CC; snap closure SKU: KD527
Select options
Quick view
Compare

USD 126
The Statesman Money Clip Statesman Wallet is a classic. This wallet is created for new age use, hence it has 6 slots to hold plastic cards along with bills. SKU: KZ541
Select options
Quick view
Compare

USD 86
The Infinity cardholder is a smooth finish classic design. A wallet that exudes a feeling of comfort and of being home. Despite its compact design, it will surprise you with the space it offers. 4CC, Center Receipt / Notes Pocket, Tone on Tone Stitching SKU: KZ916
Select options
Quick view
Compare

USD 114
The Adroit wallet is one of the most stylish accessories for men with its distinctive dimensions (most standard size wallets are slightly larger) and smart combination of colors and textures of leather. SKU: KZ588
Select options
Quick view
Compare

USD 117
Credence is the best minimalist card wallet 2020 / 2021. This men’s genuine leather wallet is tailor-fitted for the working professional. This sophisticated line of accessories has a classy look and feel. With every detail in mind, this must-have accessory boasts extra storage to accommodate any business or credit cards you might need all while fitting perfectly into your front pocket, keeping legible and precise notes on the go. SKU: KZ548
Select options
Quick view
Shopping cart
close
Select your currency
USD
AED
SAR
GBP
Personalization 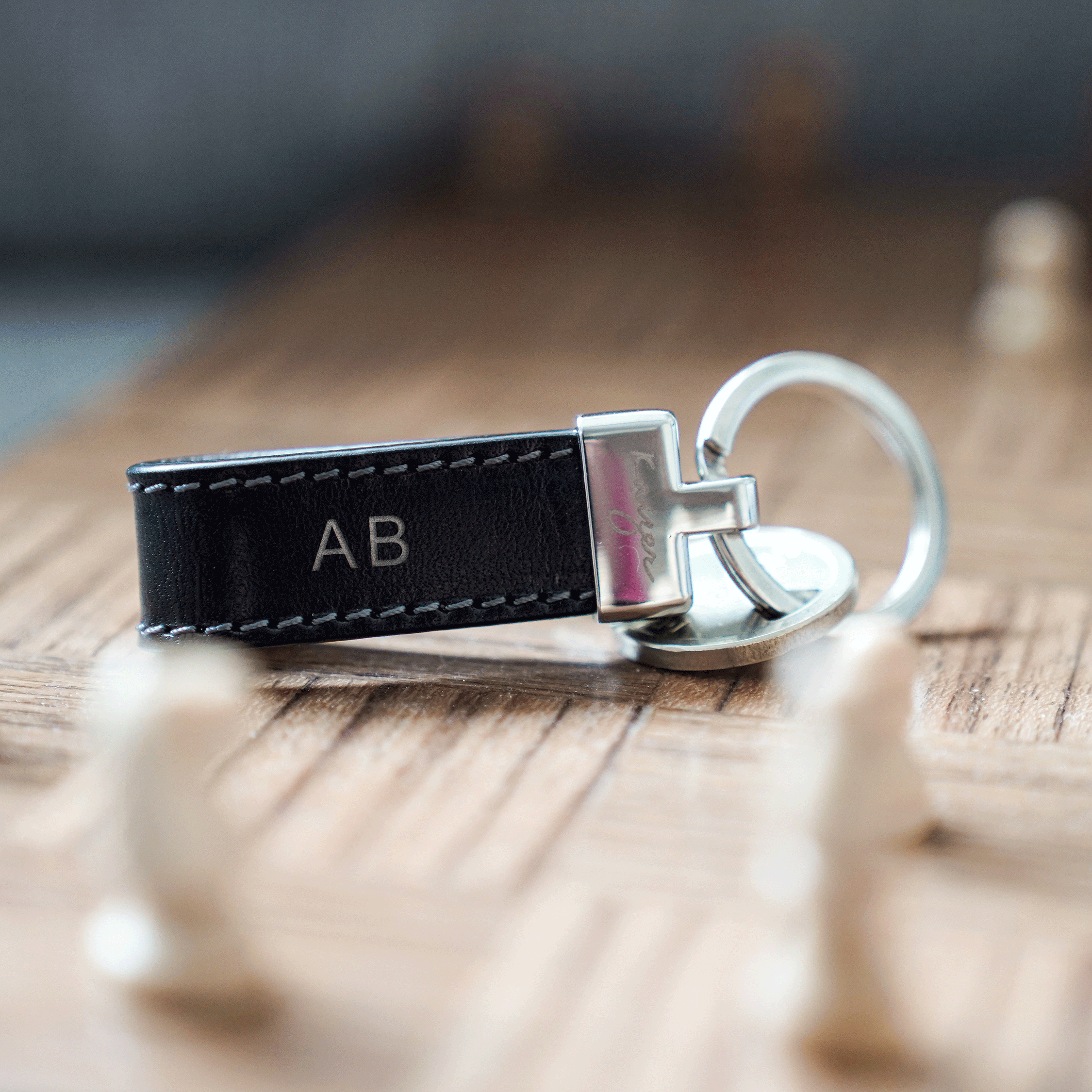 Hello, what can we help you with today?